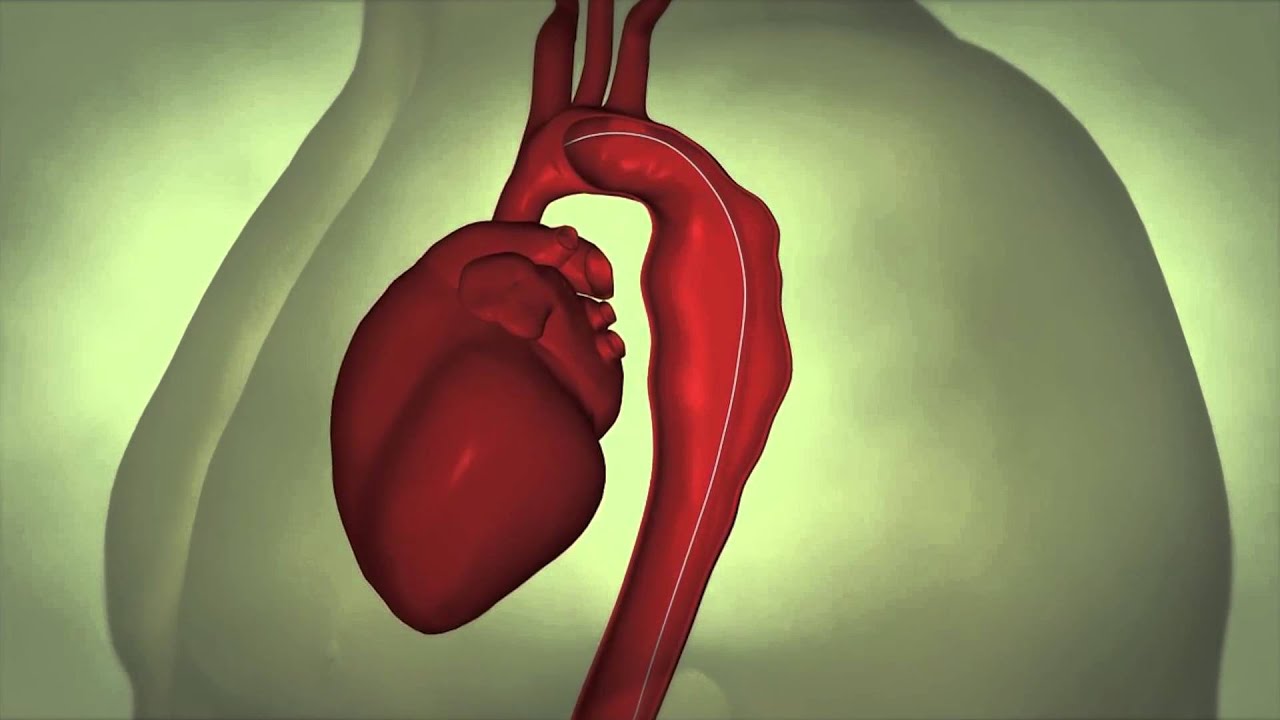 Aortic Aneurysm is a pathological local expansion of the section of the main artery, due to the weakness of its walls. Depending on the location of the aortic aneurysm, it can show itself by pain in the chest or abdomen, the presence of a pulsating tumor formation, symptoms of compression of neighboring organs: shortness of breath, cough, dysphonia, dysphagia, swelling and cyanosis of the face and neck. The basis of the diagnosis of aortic aneurysm are radiological (chest and abdominal radiography, aortography) and ultrasound methods (ultrasound of the chest / abdominal aorta). Surgical treatment of aneurysm involves performing its resection with aortic prosthesis or closed endoluminal prosthesis of the aneurysm with a special endoprosthesis. The main danger of this disease is the gradual expansion of the lumen of the vessel, which in the absence of intervention can lead to rupture.

There can be several reasons for the development of aneurysm. This is atherosclerosis with its simultaneous hardening of the arteries. The genetic factor matters, that is, the weakening and thinning of the walls of the vessel can occur due to hereditary diseases. The reason for the development of aneurysm is a previous infection, for example, syphilis and endocarditis. The most common cause of aortic aneurysm is age. With age, the veins and blood vessels lose their elasticity, the aorta becomes more rigid, which leads to the appearance and development of aneurysm. In more rare cases, aneurysm develops as a result of trauma. The aorta can be damaged due to a strong trauma to the chest or during a car accident.

Unfortunately, the most obvious and sign of aneurysm is its rupture with subsequent bleeding and a high probability of death. Despite such asymptomaticity, the problem can still be detected, since the development of the disease is often accompanied by unpleasant and painful sensations, which can be attributed to other common diseases.

Prosthetic replacement of the ascending aorta with synthetic conduit is a surgical technique in which a pathologically altered portion of the aorta is replaced with a dacron tube with an artificial aortic valve. This common treatment option has good results, but there is a slight drawback: a healthy aortic valve is replaced with an artificial valve.

Supracoronary prosthetics of the ascending aorta;

Supracoronary prosthetics of the ascending part with aortic root reconstruction;

Prosthetics of the ascending aorta and aortic valve by various types of valve-containing conduits with reimplantation of the coronary artery orifice according to the Bentall-De Bono technique (including the Kouchoukos modification);

Complete prosthetics of the aortic arch (with an end-to-end anastomosis;

Partial prosthetics of the aortic arch;

Reconstruction of the aortic arch;

Prosthetics (or reconstruction) of the arch in combination with prosthetics of the ascending aorta.

Supracoronary prosthetics of the ascending aorta;

Supracoronary prosthetics of the ascending part with aortic root reconstruction;

Prosthetics of the ascending aorta and aortic valve by various types of valve-containing conduits with reimplantation of the coronary artery orifice according to the Bentall-De Bono technique.