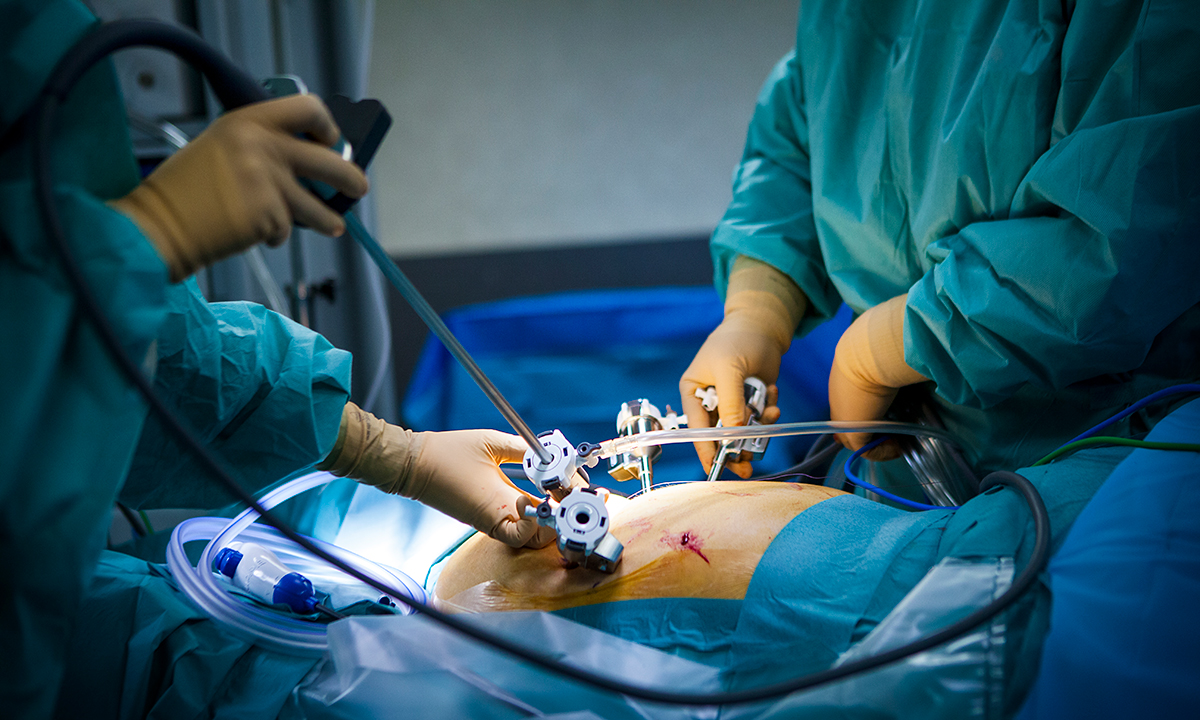 Laparoscopic hysterectomy is an operation in which all interventions are carried out through an incision in the anterior abdominal wall of a woman. Access can be longitudinal and transverse, the decision on the type of operation is made by surgeon and depends on many factors, such as the size of the tumor, previous surgical interventions and the presence of a postoperative scar in patient.

Total hysterectomy is carried out for diseases of the cervix or if patient does not want to keep the cervix, as well as for all malignant neoplasms of the genitals.

In most cases, transverse suprapubic approach is used for hysterectomy. Total hysterectomy is an operation that removes the entire uterus, body and cervix. This volume of surgical intervention has to be resorted to when the pathology of the body and cervix is ​​combined, for example, with multiple cysts and precancerous changes in the cervix. In some cases, together with the body of the uterus, surgeon removes the fallopian tubes, ovaries. The decision on the volume of surgery is made by gynecologist at the preoperative consultation.

During the intervention, the standard algorithm is followed - making incisions and inserting trocars.

To raise the abdominal wall, pneumoperitoneum is necessarily used when the cavity is filled with gas. For this, the substance is preheated to minimize tissue injury.

The skin is treated with antiseptic solutions before the incisions. The first move is made in the navel area, where a tube with a video camera is placed. In laparoscopy, the uterus is displayed and displayed on a screen. The rest of the instruments are inserted through 3-4 additional punctures.

The orientation is carried out by camera. Bleeding of small vessels is stopped with a coagulator. Sometimes vessels and tissues are fixed with clips.

Extraction of the uterus, ovaries, tubes is carried out through small holes. They are placed in a special container and pulled out. After that, the cavity is rinsed with warm saline solution.

Drains are inserted into the incisions or they are completely sutured. Next, antiseptic treatment is carried out and closed with a bandage. During the day, surgeon monitors the discharge of the infiltrate and swelling.

Laparoscopy is the most gentle surgical method in gynecology, which does not require making incisions in the abdominal cavity. Its main advantage is the minimum amount of unpleasant consequences and complications. This method is used to treat and diagnose a variety of gynecological diseases.

Laparoscopy of the uterus is one of the modern minimally invasive methods of surgical intervention, during which only a few punctures are required in the abdominal region.

Laparoscopy of the uterus is used to treat and diagnose various diseases. With its help, you can identify endometriosis, fibroids, cysts and identify the cause of infertility. It will take no more than two weeks to fully recover from such an operation.

Features of laparoscopy of the uterus

This technique has gained great popularity in gynecology, and all because:

It does not require an incision to carry it out.

Prevents the development of adhesions in tissues due to low injury risk.

Helps to examine the abdominal cavity in detail.

There is a possibility of increasing several times.

Leaves no marks or scars.

What complications can occur?

After laparoscopy of the ovary, most often, severe pains are disturbed not only in the place where the operation was performed, but also in the area of the right side and shoulder. The reason for this is the accumulation of carbon dioxide residues in the liver, which acts on the nerve as an irritant. Muscle pain and swelling of the extremities may also appear.

In the first days after the procedure, gas may accumulate in the upper fat layer. It is harmless to life and disappears within a few days.

There are also possible complications such as:
Damage to internal organs, which can occur both during the penetration of the instrument and during the filling of the abdominal cavity with carbon dioxide.
Damage to blood vessels during the puncture process. This can lead to severe bleeding and blood transfusions.
Getting infection that can get into the wound. It is to prevent such consequences, after the operation, it is required to get antibiotics.
In any case, after the operation, woman is selected an individual course of rehabilitation and her nutrition is regulated (refusal from fatty, sweet, flour, spicy, etc.).

Malignant neoplasms of the uterus and appendages

Fibroids larger than 12 weeks of gestation

Endometriosis of the uterus (adenomyosis) 3-4 degrees

Complete damage of the uterus

Precancerous diseases of the cervix

One of the most important questions of interest to patients before planning hysterectomy is the effect of the operation on their sex life. Surgeons suggest avoiding sexual activity for at least 6 to 8 weeks after hysterectomy. After this time, intercourse should not cause pain or discomfort.

Sexual activity after hysterectomy has been extensively studied. It has been proven that hysterectomy does not lead to significant changes in sex drive or the ability to enjoy sex. Most women who have healthy sex life can return to their pre-operative level of activity.

Studies have shown that the ability to have an orgasm during intercourse does not change after surgery. Women should not be afraid to remove the uterus and ignore doctor's recommendations. In some cases, this is the only option not only to get rid of the disease, but also to save lives.

Laparoscopy is performed under general anesthesia. When preparing, it is important to decide on the type of anesthesia. This is helped by the attending surgeon and anesthesiologist. Patient's condition and concomitant diseases are taken into account. It may additionally require consultation of specialist who is appointed by therapist. Fasting is required 10 or 12 hours before the operation. It is not allowed to drink liquid in the morning. Cleansing enema is carried out in a few hours.

It is necessary to follow hygienic measures to remove hair. Hair can get caught in the open cut and infect tissues. If the laparoscopy is of an emergency rather than planned, the examination is shortened. During menstruation, the tissues may bleed, so the operation is postponed.

An hour before the start of surgery, patient is given a preliminary administration of medications. These can be antibiotics and vitamins. In the operating unit, a dropper is connected and an apparatus with a monitor is installed on which all actions are displayed.

Removal of the uterus is a complex operation, sometimes recovery after laparoscopy lasts up to 6 months. During this period, there is a normalization in physical and psychological terms. Sexual intercourse should be excluded within a month. Diet should be followed after laparoscopy to reduce organ stress and fat accumulation. Physical activity is allowed no earlier than 30-60 days. To strengthen overall health and immunity, it is recommended to take multivitamin complexes. Suture care for minimally invasive surgery is not difficult. The risk of their discrepancy or suppuration is minimal. It is enough to wipe the skin with an antiseptic. Dressings are done until the sutures are completely absorbed or removed. When using shower for 2 weeks, the puncture sites are covered with a waterproof material. It is better to refuse cosmetics containing dyes or fragrances. It is best not to smoke for 3 weeks. Nicotine inhibits the regeneration process. During the month, it is important to control the load on the abdominal press in order to avoid the appearance of ventral hernias. Sometimes patients are prescribed to wear a postoperative bandage. Walking in the fresh air is mandatory, since it is impossible to completely switch to a sedentary lifestyle.