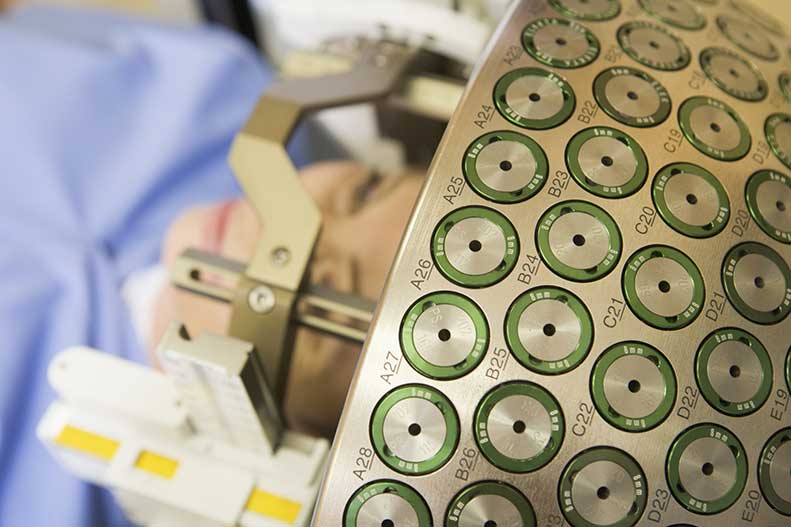 Gamma Knife allows to remove malignant, benign tumors in the brain, the formation of soft tissues of the head and neck without trepanation (opening the skull).

This method has several advantages: it is performed without anesthesia, does not require a recovery period and long preparation, it is characterized by low probability of complications. But it is the gamma knife that allows us to make favorable predictions on the survival of patients - benign tumors are completely removed in 95% of cases, malignant ones stop growing and gradually disappear in 89%.

Gamma knife was first used in the late 80s of the last century, it was originally designed exclusively for use on the brain - in particular, the removal of tumors of benign and malignant origins.

Hard-to-reach, deeply located tumors have always remained a significant problem of oncology, because complexity arises not only with penetration to the neoplasm, but also with maintaining the integrity of the tissues that lie along this path. This issue is especially occurs with intracranial tumors, which relatively recently could only be removed surgically, and if such treatment was not possible, patients were considered incurable and received only palliative care, which could not but affect the overall duration and quality of their life.

Gamma knife is irradiation with a precisely focused rays that emanates from more than 200 emitters. Radioactive cobalt gives radiation energy, the rays converge at one point, where the maximum dose of destructive effect is reached. The point of application of the radioactive ray is carefully verified, it should be only a tumor.

The most powerful radioactive radiation has a damaging effect on tumor cells, destroys their DNA, thereby inhibiting the further reproduction of cells and the growth of neoplasia. The neoplasm does not disappear at the same time, as happens during a surgical operation, it takes time to completely eradicate the tumor.

In some cases, for example, with meningiomas of small sizes, there is no need for its complete destruction. It is enough to stop the growth of the neoplasm, and if it does not squeeze any structures and does not provoke an increase in intracranial pressure, then after stopping the growth it will not pose any threat to either the health or life of the patient.

In the treatment of vascular malformations and aneurysms, the gamma-ray causes the death of endothelial cells lining the vessels from the inside, which provokes the destruction of the vascular walls themselves with complete obliteration (sclerosis) of their gaps. Aneurysm in this case decreases or completely disappears. In the case of surgical treatment of vascular lesions, there is a significant risk of bleeding, which is minimized by radiosurgical exposure.

Exact ray focusing is only possible with rigid fixation of patient’s head. After the end of the procedure, patient can immediately go home, there is no need for hospitalization.

Stereotactic radiosurgery is used for a variety of tumors of the brain, cranial nerves, vascular malformations, etc. Indications for the use of the method are:

With the help of a gamma knife, neoplasms with sizes up to 3.5 cm can be removed, otherwise the technique will be contraindicated, however, malformations from blood vessels can be irradiated with a gamma knife and with large sizes. For glioblastoma, the gamma knife is ineffective, therefore it is extremely rarely used with this type of neoplasia. Other obstacles to the use of radiosurgery may include:

Severe condition of patient due to decompensated diseases of the heart, blood vessels, kidneys and other internal organs;
Swelling of the brain in acute phase;
Acute hydrocephalus from the closing of the cerebrospinal fluid by a mechanical obstacle;
Refusal of patient from other types of treatment, even if they are technically possible and safe;
The size of the neoplasm is more than 3.5 cm.

Unlike surgical treatment, radiosurgery does not require special or long preparation. Patient can eat and drink before the treatment session, there is no limit, but it is better to exclude alcohol. A couple of hours before the procedure, you can eat so that you don't feel hungry right during the procedure. The amount of fluid drunk should not be excessive, because many patients have to lie without possibility to go to toilet for more than an hour.