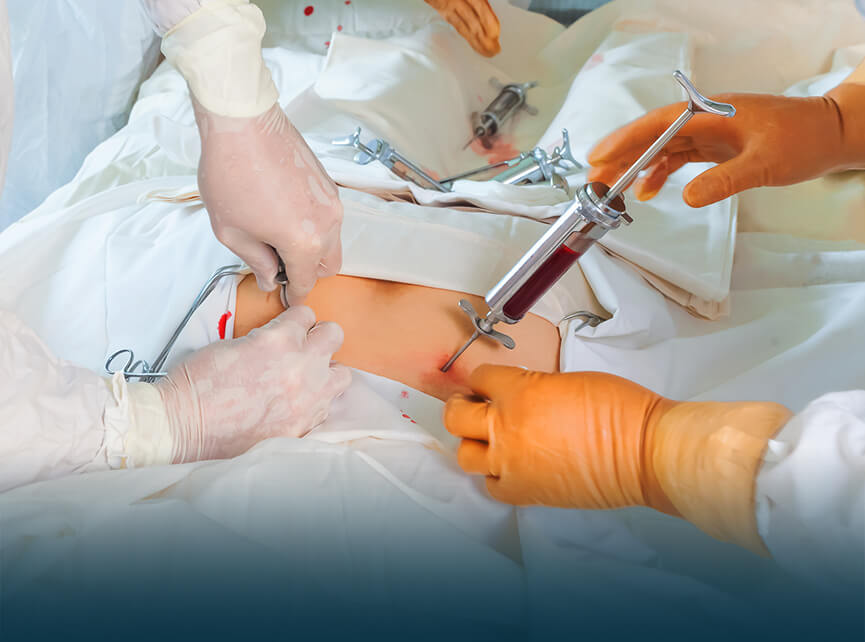 Bone marrow transplantation may be required if the bone marrow has stopped working and does not produce enough healthy blood cells.

When BMT is needed

BMT can be indicated in the following situations:

Bone marrow transplantation can save patients with many pathologies, both malignant and benign nature of the disease, for example:

Patient will need to go through a series of tests and studies to diagnose general body condition and status in order to make sure that body is ready for BMT. The examination may take several days or even more.
In addition, the doctor will install a long thin tube (central venous intravenous catheter) into a large vein in the upper chest or neck. The catheter usually remains in place throughout the treatment period. BMT team will use it to inject somatic cells previously collected for BMT, as well as various medications and blood products into patient's body.

The apheresis device divides blood into different parts, including somatic cells. Somatic cells are collected and frozen for future use in transplantation. The remaining blood returns to the body.

What to expect during BMT

On the day of transplant, called day zero, somatic cells are introduced into your body through the catheter. Infusion, the introduction of intravenous donor cells is painless. During the procedure, patient is awake.
Transplanted somatic cells enter the bone marrow, where they begin to create new blood cells. The production of new blood cells can take several weeks, after which, accordingly, blood counts can begin to recover.

Bone marrow or blood somatic cells that have been frozen and thawed contain preservative that protects the cells. Shortly before transplantation, patient may be prescribed medications to reduce side effects that may be caused by preservative. Patient will also probably be given intravenous fluids (hydration) before and after transplantation to help the body to get rid of the preservative.

Bone marrow transplantation has many complications, some of which are potentially fatal.
The risk may depend on many factors, including the type of disease or condition, type of transplant, age and health of the person receiving the transplant.

Although some people experience minimal bone marrow transplant problems, in others the process can occur with complications that may require treatment or hospitalization. Some complications can even be life threatening.

Complications that may occur during bone marrow transplantation include:

When new somatic cells enter the body, they begin to spread throughout the body, including the bone marrow. Over time, they increase in number and begin to create new healthy blood cells. This is called engraftment. It usually takes several weeks before the number of blood cells in your body begins to normalize. For some people, this may take longer.

On the days and weeks after bone marrow transplantation, blood test is taken and other tests performed to monitor condition.

After bone marrow transplantation, patient is under direct medical monitoring. If you there are infectious or other complications, patient may need to stay in  hospital for several days or sometimes longer. Depending on the type of transplant and the risk of complications, patient  needs to stay close to the hospital for several weeks or months in order to carry out careful monitoring.

Patient may also need to periodically transfuse red blood cells and platelets until the bone marrow begins to produce enough of these cells on its own. Patient may be at greater risk of infection or other complications for several months to several years after transplantation.

BMT can lead to a cure for some diseases, some diseases pass through remission due to BMT. Bone marrow transplant goals depend on individual situation, but usually include controlling or treating the disease, prolonging life, and improving quality of life.